Chicken kiev is a popular dish of chicken breast rolled around butter. It's often stuffed with grated cheese, mushrooms, herbs, egg yolk, then breaded and baked in oil. 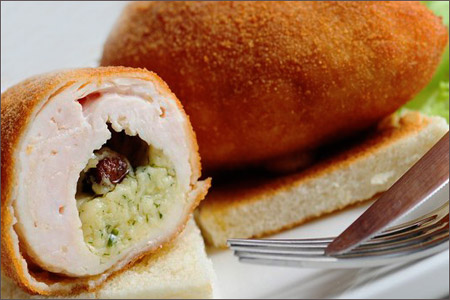 There are several versions of the history of the origin of the dish.

The French claim that the recipe for Chicken Kyiv was taken from France during the reign of Empress Elizabeth, who sent young people to France to study the culinary business. Thus, according to the French, chef Nicolas Appert invented the dish which was called "de-vollay" at that time.

The Russian usually say that this dish was invented later. They say that in 1912 a Russian cook prepared a very tasty dish that was named "Mikailovsky". Most probably this name was chosen because Mikhailovsky Palace was close to the restaurant where the chicken rolls were served for the first time.

After the revolution, the recipe was almost forgotten, however, remained in Ukraine. In 1947, one of Kyiv's chefs decided to prepare the Chicken kiev for the reception of the Ukrainian delegation from Paris. Everybody liked the dish so much that it quickly entered the restaurant menu.

You may find Chicken Kyiv in numerous Moscow restaurants. Why not try it during Moscow in three days visit?
Top Moscow and Russia tours