This old shop, located in the historic center of Moscow on Tverskaya street, attracts visitors not only with its delicacies but also with its exquisite interiors and unique decoration. Entering this grocery store you feel like a guest at a reception in a rich, late 19th-century palace. 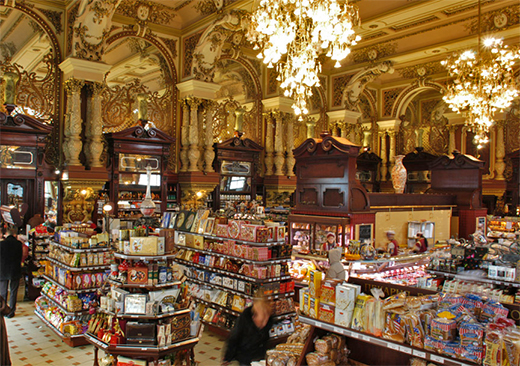 The history of Eliseevsky store

The mansion was bought by Grigory Eliseev, a tradesman of wine and colonial produce. The house was covered with scaffolding while being reconstructed. Some nimble people managed to peep at the building works and spread rumors of the construction of an Indian pagoda or a Moorish castle. But their surprise exceeded speculation when they saw "the temple of gluttony". 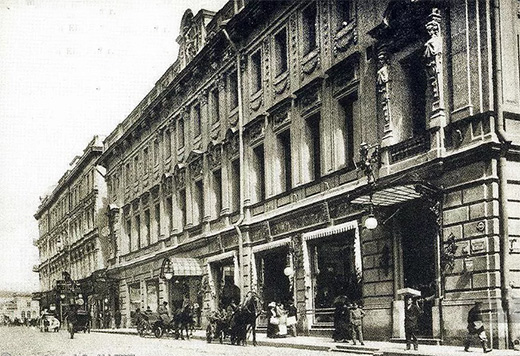 Eliseevsky grocery store on the old postcard
"Eliseevsky" was opened solemnly with a church service and with priests who were invited specially for that ceremony. It definitely stoked the imagination of its customers. They saw lavishly decorated interiors with huge crystal chandeliers, reminiscent of bunches of grapes; aisles heaped with exotic fruits: pyramids of coconuts and bunches of tropical bananas. Multi-colored creatures of the sea became inhabitants of huge glass vessels. To crown it all there were numerous rows of glittering wine bottles reflecting in mirrors and windows. Customers just got lost in its abundance.

The merchant Grigory Eliseev surprised the sophisticated Moscow audience not only with the splendor of interiors but also with the choice of new, unusual delicacies.
Anchovies were an unusual novelty for Muscovites. They quickly became popular and fashionable.
Truffles - French delicacy has always been and remains an expensive product. Thanks to Eliseev, Moscow gourmets had the chance to try truffles for the first time.
Olive oil from Provence gained its popularity after it appeared on the shelves of a new deli.

Extremely polite salespeople hurried to help their customers to make the best choice. Well-trained sales assistants could recognize their "visitors" not only by their face and their names but also by their preferences and taste. It was a must for them to speak several foreign languages.

For the first time, representatives of wealthy classes were very excited to do the grocery shopping on their own. The porters from the shop were engaged to deliver the groceries to the carts of their clients. The shop owner even engaged two vets whose job was to take care of their clients' pets.

After the revolution of 1917 the store was nationalized and continued to work under the name "Gastronom №1". However, the Muscovites called it "Eliseevsky" paying tribute to its founder whose portrait continued to decorate the wall of the main sales area.

Nothing has changed since those days. It is still a grocery store, owned by a trading network "Alye Parusa". It still impresses its customers and visitors with its astonishing interiors and abundant decoration. It still offers a lot of Russian and foreign delicacies including black caviar, luxury vodka brands, and many more.

Walking along Tverskaya Street, do not miss the chance to visit the Eliseevsky store with your Moscow tour guide or by yourself. We can easily include a quick stop at the shop in any of your Moscow tours. 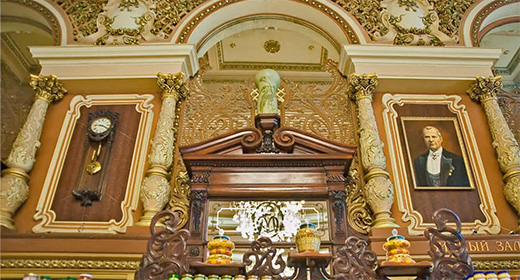