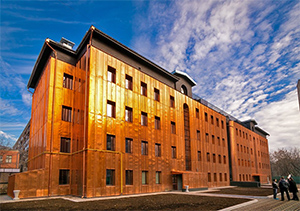 Gulag museum
The State Museum of GULAG is devoted to one of the most miserable times in our history. GULAG is the acronym for the Russian translation of ‘Chief Administration of Corrective Labor Camps and Colonies’ but nowadays this word – Gulag – has come to mean the Soviet repressive system itself.

Anton Antonov-Avseenko, a well-known historian, writer, public figure, and son of a famous revolutionary, founded the museum. Soon after the execution of his father in 1938, Anton was arrested for being the son of the "enemy". He went through six labor camps and spent ten years of his life there. His dream of a museum foundation finally came true in 2001.

The tour of the museum starts in front of the map showing the Gulag camps; the scale of the political repression in the USSR is startling. About 14 million people passed through the "labor camps", with millions killed by the brutal policy of the Soviet regime.  The various halls house documentary archives and personal belongings of witnesses that lived through the hell of the political repressions. Documents, letters and memoirs of the former inmates tell the story of the creation of the first concentration camps in 1918, the formation of the Gulag in the 1930s, the tightening of the purges in 1937, the eviction of the Volga Germans and further mass deportation of peoples in 1943-44.

The museum staff carefully traces the tragedy of one family after another. Okudzhava, Antonov-Ovseenko, Zhdanov and hundreds of thousands of known and unknown families experienced the horror of the great purge.

An important part of the museum is the reconstruction of some sections of a camp's environment: the barrack for prisoners; the punishment cell; the investigator's office and the watch-tower for guards (in the courtyard). The museum often hosts theatre performances, concerts, readings and other events.

If you're interested in the Soviet history you should definitely include the Gulag museum in your Moscow tour itinerary.
Top Moscow and Russia tours