The leader of the Revolution and the first head of the Soviet Union died in 1924 - but Lenin was not buried in a cemetery. The Soviet government came up with the most unusual idea: his body was embalmed and a granite mausoleum was constructed for him on Red Square. 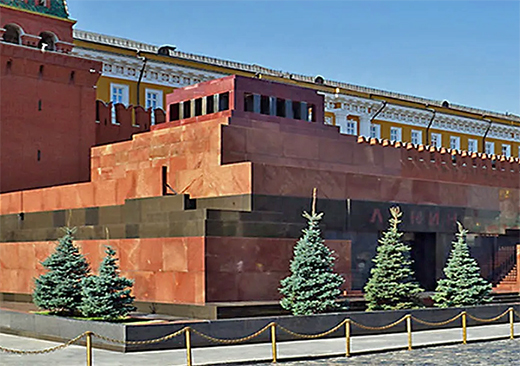 Lenin's mausoleum in Moscow
Lenin's tomb has echoes of the ancient pyramids. Belief in an afterlife, combined with their knowledge of embalming techniques, led the Egyptians to construct pyramids to immortalize their rulers. The Soviet government may have been atheist but they believed in the afterlife of Lenin's ideas. His body was placed in a glass sarcophagus, and thousands of people came to see it each day. Lenin was immortalized by Soviet propaganda.

How did Lenin die

In May 1922, Lenin fell seriously ill. The last time he appeared in public was in November 1922. Starting from December 1922, he lived in his countryside estate Gorki. In the two years before he died, Lenin had three severe strokes.

Leading German doctors were trying to cure the head of the Soviet government. They proposed various diagnoses, such as nervous exhaustion, chronic lead intoxication from the two bullets lodged in his body since 1918, cerebral arteriosclerosis, and more. However, until now, doctors have not come to a single conclusion about the causes of his death.

On 23 January, the coffin with Lenin's body was taken by train from Gorki to Moscow. It was displayed for three days at the Hall of Columns.  On 27 January, the body of Lenin was delivered to Red Square.

The history of Lenin's mausoleum

The first mausoleum was constructed from wood. In 1924, no one was certain if the embalming process would be effective or long-lasting. The government wanted to maintain the body for several months, which would allow people from all over the country to see Lenin. After some time had past and the embalming technique was proven to be reliable, it was decided to keep Lenin in the mausoleum forever. The architect Shusev constructed a new stone building in 1930.

Lenin's mausoleum was not only used as a tomb. A stand was constructed on the top, enabling the communist party leadership to watch the parades. Ceremonial events were held there. The changing of the guard outside the mausoleum became a popular attraction with visitors.

Yet Lenin is not the only person buried on Red Square. There is a necropolis near Lenin's tomb where the pro-Bolshevik victims of the October Revolution were buried in mass graves in 1917. When Stalin died in 1953 he was also interred inside the mausoleum, his sarcophagus placed beside Lenin. His body was removed from the tomb in 1961 when Khrushchev denounced his crimes. Today, Stalin is buried behind the mausoleum with other Soviet rulers such as Brezhnev, Andropov, and Chernenko.

Recently, there has been some debate about what should be done with Lenin’s tomb. Perhaps it is time to remove Lenin's body and have a proper funeral? Or should we keep the mausoleum as part of our history? It's very hard to find the right answer.

Working hours:  The tomb – and Lenin’s body - can be viewed between 10 am and 1 pm every day except Monday and Friday.


You can visit the mausoleum with us during your Moscow private tour. We do add it to any of our classic itineraries, such as Moscow in 1 day, Moscow 2 or 3-day tour, Moscow in 4-5 days.