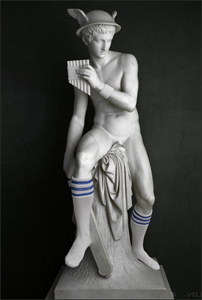 Mercury (Socks) - 2011
Moscow Biennale of Contemporary Art is one of the most prestigious art even in Russia. Since 2005 it has gained recognition on the international art scene. This year it 'll feature  64 artists and 16 art groups from 33 countries who will bring painting, sculpture, photography, video and sound art, computer assisted art and performance art to Moscow. The Biennale runs from September 23 to October 30.
The theme of the Biennale, is "Rewriting Worlds", Peter Weibel, its Austrian curator comments that art is a sphere where new things are unceasingly being born. Contemporary artists overwrite the existing world, conveying new ideas in their works.
One of the highlights of the biennale is the video by a dissident artist from China. Ai Weiwei was recently released from a Chinese prison after two months in detention. "Beijing: the Second Ring" shows the Chinese capital's transformation and its incessant traffic flow.
The festival of 'activist art' taking place at the ArtPlay design centre will bring more artists involved in political and social activism to the Biennale.What unites dozens of artists from around the world is "the art of going out into the streets calling for social change". Within two weeks the festival will feature films, lectures, discussions, master classes. Among the artists involved are the heroes of political provocations The Yes Men, American radical group Gran Fury, International group, based in Berlin, Organ Kritischer Kunst protesting against "racism, militarism, sexism and fascism ", Russian and Ukranian activists.
A Dada Festival will also be held in the ArtPlay Design Centre, with participants declaring to be ideological heirs to the movement of Dada,  led by Tristan Tzara during  the First World War and a couple of years after. Dadaist art exhibitions, discussions and performances will also be part of the programme.
Everyone who's curious to visit the Biennale is welcome to the ArtPlay Design Centre and TSUM Art Foundation, both in central Moscow. There will also parallel programs at different venues. While planning your Moscow tours itinerary we'd be glad to include  contemporary art gallaries in the itinerary.