700 anniversary of St. Sergius of Radonezh


16.07.2014 – 18.07.2014
2014 marks 700 anniversary from the birth of St. Sergius of Radonezh who is one of the most highly venerated saints in Russia. St Sergius was a spiritual leader, the monastic reformer of mediaeval Russia, the founder of The Holy Trinity St Sergius Lavra. 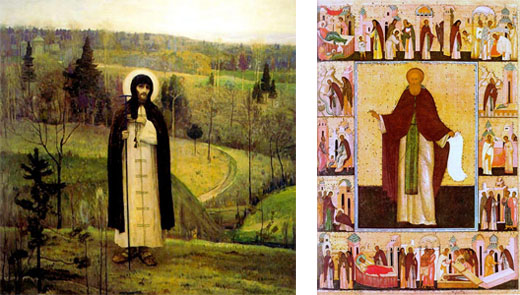 Over 100 000 pilgrims will come to the Holy Trinity monastery on July 16-18. These days the Russian Orthodox Church celebrates the discovery of St Sergius incorrupt relics ( St Sergius died 1392, his relics were found 30 years later untouched by decay).  Other events dedicated to St Sergius include celebrations of his birthday (it was in May 2014) and services devoted to his death (October 2014).

July 16 12.00 Cross Procession from Khotkovo nunnery to The Holy Trinity St Sergius Lavra.
July 16-19 International Festival of spiritual and folk music. Numerous vocal ensembles, orchestras, dance groups will perform on the Annunciation field which is one kilometer from the Trinity-Sergius Lavra.
July 17 All-night vigil on the Annunciation field starting at 6 pm.
July 17-18 Festivals devoted to Russian toys and Russian matryoshka. Sergiev Posad is not only the Russian religious center but also the birth place of the Russian doll.
July 18 Divine Liturgy conducted by the Patriarch at the Cathedral Square of the Trinity-Sergius Lavra, starts at 9 am.
July 18 Bell music festival at the White Pond near the ‘The Stables’ museum complex, begins at 9 am
July 18 ‘Russian traditions and modern family’ family program.  Children will have a chance to learn about
traditional folk culture in master classes, quizzes, games, quests. ‘The Stables’ museum complex
These days the Trinity-Sergius Lavra will be visited by delegations from the Local Orthodox Churches and top government officials.

While planning a tour of Moscow in July please beware that the Holy Trinity monastery will be closed from July 16-July 20 for regular tourists. You can visit Sergiev Posad with your Moscow tour guide any other day..