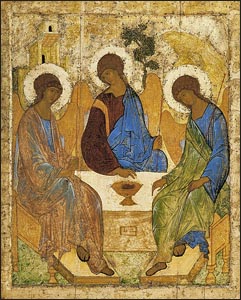 Andrey Rublev. The Trinity
These days the visitors of Moscow are given a unique chance to see works of the greatest medieval Russian artist Andrey Rublev. The exhibition takes place in the Tretyakov Galery (on Lavrushensky lane) and is devoted to the artist's 650s anniversary.

In fact there's very little information about Rublev's life.  We don't know where and when he was born. Some of the historians believe it happened in the 1360s-70s but there's no reliable information to prove it. The first mention of Rublev is in 1405 when he worked in the Annunciation cathedral of Moscow Kremlin. Chronicles tell us that in 1408 he painted together with Daniil Cherni the Assumption Cathedral in Vladimir. He later became a monk in the Trinity-St. Sergius Lavra where he painted in 1425-27 St. Trinity cathedral. After Daniil's death Andrei came to Moscow's Andronikov Monastery where he painted his last work, the frescoes of the Savior Cathedral. It is believed that Andrei died at Andronikov Monastery in 1430 although his remains was not found.

In the medieval Russia artists never signed the icons; most often we don't know names of great religious masters of the 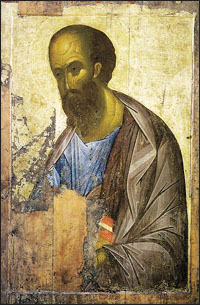 Andrey Rublev. Apostle Paul
past. The attribution is usually based on style and literary evidence.  Where're Rublev's icons now? This question is very difficult to answer. Many famous Rublev's works described in old books and chronicles were lost, some have survived only in small fragments. That's why his icon "Holy Trinity" and  frescoes of the Assumption Cathedral in Vladimir are of such an exceptional value for us.

The exhibition in the Tretyakov gallery is very small. You'll see some famous icons from the permanent collection of the gallery and a few icons and fragments of frescoes brought from other museums of Russia (The State Russian museum, The State history museum, Sergiev Posad and  Zvenigorod museums). Very often researches can only attribute these works to disciples and followers of Rublev and artists of his circle. Does it sound disappointing?

But isn't it impressive to see images that are over 600 years old, that are believed to be the most perfect of
what has been created in the religious Russian art?  While watching icons you should never hurry. Even if you don't know much about the church paintings try to feel the powerful energy coming from these images. The beautiful religious musicс played at the exhibition will help you to achieve a contemplative state of mind.

Your Moscow tour guide can tell you more about the Russian icon painting. Planning your Moscow tours don't miss this unique opportunity to see Andrey Rublev inside the Tretyakov gallery.