Son of a Greek shoemaker who emigrated to Mariupol (now Ukraine), Arkhip Kuindzhi (1842-1910) was one of the most significant 19th century Russian painters, quite influenced by previous masters as Ivan Aivazovsky. Kuindzhi was a professor at the Saint Petersburg Academy of Arts untill he was fired for support of students' protests.

He studied painting mainly independently and at the St. Petersburg Academy of Arts (from 1868; a full member since 1893). He was co-partner of traveling art exhibitions, organized by Peredvizhniki (The Wanderers) — a group of Russian realist artists, who formed an artists' cooperative in protest of academic restrictions. In the mid-1870's, Arkhip continued to create his landscape paintings.

In his works, he fused the experience of the previous development of landscape painting and with his characteristic originality transformed Russian and European romanticism, the achievements of the French Barbizon school, the Impressionists and open a brand-new for that era decorative theatricality in easel paintings. Without Kuindzhi would not be what they were two landscape genius – Levitan, Serov. Under the direct influence of Kuindzhi formed such outstanding masters as N. Roerich, K. Bogaevsky, A.Rylov. 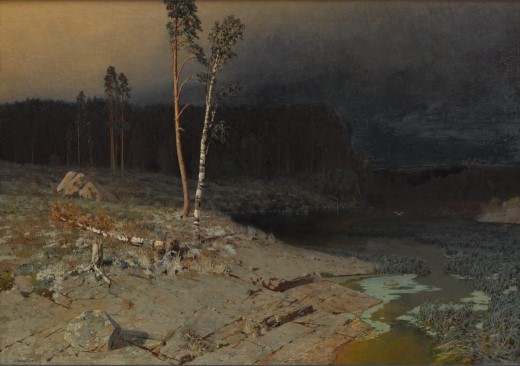 On the island of Valaam. 1873
In the Tretyakov gallery exhibition of outstanding landscape painter was last organized in 1992. It presented part of the artistic heritage of the master, mainly finished works. In today's exhibition, along with famous paintings, you can see numerous sketches. The current project boasts a significantly expanded exposition of more than 180 selected works. The exhibition includes, in addition to paintings and works from the collection of the Tretyakov gallery and the Russian Museum, works from 19 major regional collections, as well as museums of neighboring countries — Azerbaijan, Belarus, and from one private collection.