International Art Fair ART MOSCOW  will be held in  the Central House of Artists from 21 to 25 September 2011. Since 1996 it has become a key event in the Russian art market. 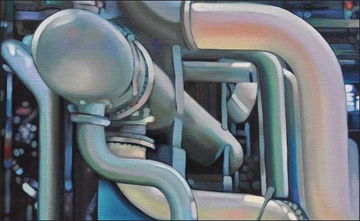 This year over 40 galleries from 14 countries will introduce their collections at "Art-Moscow". The fair brings together a large number of Russian and foreign visitors, including collectors, curators, artists, representatives of Russian and foreign museums, art dealers, journalists, art critics and art lovers.

The main objective of the Fair is to exhibit and sell works of art of the XX - XXI century. Priorities for the display are the works that have appeared during the last 20-30 years. The exhibition will also feature some earlier classic examples of modernism that have influenced the development of the contemporary art.

In a special program the art fair will present not only galleries but some  personal expositions. One can see photo-works of Jeff Cowen, installations by Vitas Stasyunas, 3D-projects supervised by Liza Plavinskaya, the  exhibition of young British artists Translate / Transcribe as well as the performances by Tajik Art group that redraws paintings by Rothko and Malevich.

In addition, the Central House of Artists hosts the festival of the new culture. One of the highlights is the "Hurt feelings" play staged by "Theater.doc". There'll be also lectures by Carlos Amorales and Adrian Not, creative workshops and seminars,  a series of film screenings by Jason Underhill

Everyone who loves art and who's having a tour of Moscow in September is welcome to visit Art Moscow fair and also the 4th Moscow Biennale of the Contemporary Art. September in Moscow is truly rich for art events.