The historic building of the Bolshoi Theatre opens its doors on October 28, 2011 after 6 years of restoration. 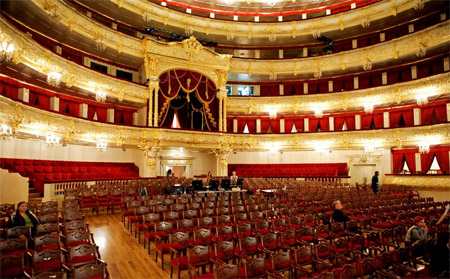 Bolshoi is one of the greatest and oldest ballet and opera companies of the world. The history of the theatre goes back to the late 18th century; the existing old building was designed by the architect Joseph Bové In 1825. During the Soviet years the Bolshoi was reconstructed a few times, but original tsarist interior and acoustics were seriously damaged. But now the experts can prove that the unique acoustics and the interior decorations of the theatre are restored.

Everyone planning Moscow tours now has a chance to see the performance in the impressive main stage!

At the very top of the façade, the double-headed eagle was put up in place where the Soviet hammer and sickle hung until 2005. The theatre is now almost twice as big, going six floors underground. Beethoven transformation stage has a chamber hall directly under the Theatre Square. It's separated from the metro tunnels by the soundproof wall. Inside the theatre the transformation is truly remarkable: carved mouldings are shining with gold leaf, the seats have been re-covered in plush red velour, the imperial monogram and twelve unique tapestries have been restored.

But the cost of the renovation won't leave you unimpressed, it has grown up almost 16 times exceeding  $800 million.

Gala concert dedicated to the opening of the historic scene will be broadcast on The concert will feature Bolshoi Theatre singers and dancers and recognized international stars. The program will include excerpts from the operas "Life for the Tsar (Ivan Susanin)" by Glinka,  "Prince Igor" by Borodin and "Betrothal in a Monastery" by Prokofiev, and ballets "Spartacus," "Don Quixote", "Golden Age" and "Flames of Paris". The broadcast will start on October 28 at 18:00