On the first week of September the Museum “Borodino battlefield” will prepare for its guests the most spectacular and large-scale military historical holiday dedicated to the 203d anniversary of the main battle of the Patriotic War of 1812. This annual festival represent a kind of reconstruction of this important historical event. Moscow tour guides recommend that you visit this historic place and feel the breath-taking atmosphere of Borodino battle. 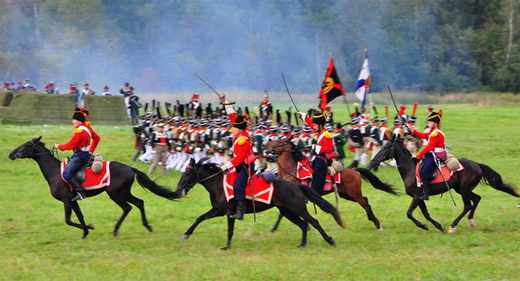 This year on the 6th of September the guests of Borodino Museum will be able to see the reconstruction of the battle for the centre of Russian position called “Kurgannaya Vysota” where the famous Raevsky's battery hold the line. In this event the main military historical Russian and foreign club will take part. The authenticity of the participants will be guaranteed by the International Military Historical Association and the clubs, specialized on historical reconstruction.

All the visitors of this historical festival will have a chance to watch the battle for free. The program of this event promises to be very interesting. So don't miss this opportunity and come to Borodino Museum this September. Moscow tour guides hope you'll have an outstanding weekend!