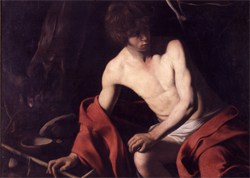 Caravaggio's talent was not appreciated by contemporaries, but his work had an enormous impact on the artists of later generation such as Rembrandt and Rubens. In the XVI-XVII centuries his artistic stile was considered too eccentric or even provocative. But today Caravaggio is valued very high. Irina Antonova, the head of Pushkin Museum of Fine Arts, calls him a great reformer and believes that he alone could do as much as Michelangelo, Leonardo da Vinci, Raphael and Titian did together at the turn of the XV-XVI centuries.

Caravaggio is often dubbed the first master of photographic technique. He turned his studio into a camera obscura, having made a hole in the ceiling to project images onto the canvas. The technique of using lenses and mirrors was earlier described by Leonardo da Vinci. New evidence suggests that Caravaggio used a chemical that made his canvases similar to a photographic film. The artist would later finish the imprinted images.

There are a total of eleven works by the painter on display in Pushkin museum. It is, indeed, almost unprecedented project; such a big exhibition of Caravaggio's paintings has never been organized outside Italy. During your Moscow tours we invite you to visit Pushkin Museum of Fine Arts. The exhibition runs until February 19.