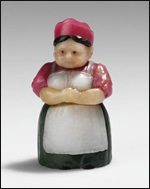 Female figurine, Faberge
These days visitors of Moscow Kremlin are given a great opportunity to see the masterpieces of semi-precious stones. The exhibition is held in the Moscow Kremlin Assumption Belfry, it comprises artworks by Carl Fabergé and other outstanding jewelers of the time.

Here you can see over 400 jewellery pieces made from precious and semiprecious stones brought from the Urals, Siberian and Altai regions of Russia.  The name of Carl Faberge is an eye-catcher for the majority of tourists. But this exhibition will surprise you with amazing work of his less famous contemporaries, whose names have been unjustly forgotten and known only to a narrow circle of specialists.

There're definitely lots of works by Faberge. For example you'll see all sorts of boxes, containers and vases, desk sets,

Madonna Lily Egg , Faberge
pencil holders. There's even a glue jar a in the form of a green apple and other stationery items. Memorial items are of special interest as being related to historical events, persons, and members of the Romanov family. Many of them are displayed in the Museum for the first time. You won't  take your eyes off  the botanical wonders - sprigs of flowers and berries in stone, collected by the organizers of the exhibition throughout Russia. Special chic among stone-carving masters was to make a vessel, as if filled with crystal-clear water. Visitors can see a flower, made on the tenth anniversary of Nicholas II and Alexandra's. When you click on the button the petals open, revealing the diamond framed miniature portraits of five children of the royal couple.

The exhibition features six Easter eggs, which are most well-known works of the company.  One of them, with a bouquet of chalcedony lilies, Nicholas II gave to his wife in 1899.

A very interesting story is about one unfinished eggs, which was stored in the Mineralogical Museum for many years. It represent the blue sky with star constellations.The stars were meant to be made of diamonds. The egg was prepared as a gift to Prince Alexei on Easter 1917. For obvious reasons, it was never finished.

We invite you to visit this exhibition during your Moscow tours. Just ask your Moscow tour guide to spend more time in the Kremlin and you'll discover  these stone wonders..