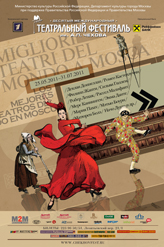 Once again Moscow hosts Chekhov International Theatre festival this summer. It became a tradition to bring foreign performances to Moscow stages. It is definitely joyful and longed for event for all those who love theatre. The genre palette of the Festival is being enriched each year with opera and ballet productions, the performances of the Zingaro Equestrian Theatre.The 10th Chekhov International Theatre Festival is scheduled to take place in Moscow from May 25 to July 31. The year 2011 is the year of Italy and Spain that is why this festival program features two productions from Italy and four from Spain. To learn more about the festival program can be on the . You can also use the services of our Moscow tour guides who will help you to purchase tickets while you are on Moscow tour.