“Circle of light” international festival is truly one of the most long-expected events in Moscow this autumn. The show is created by most talented light designers and 2D and 3D graphic designers who use Moscow urban space as a screen for different multimedia and light installations. You will be able to see light and music performances at 9 venues in Moscow. The admission to the festival is free. 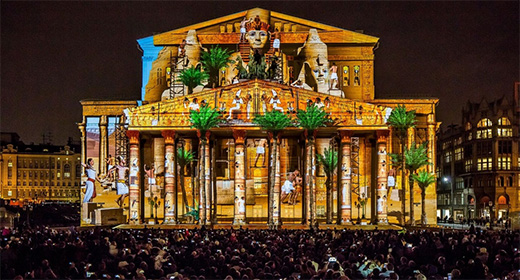 The opening of “Circle of light” festival will be on the 26th of September on the Frunzenskaya embankment. The visitors will have a pleasure to see 6 different novels produced by the professionals from Russia, France, Great Britain and UAE. This show using more than 500 units of light equipment and 140 projectors promises to be really breathtaking.
The Bolshoy Theatre will be the screen for  “Swan lake” and “Karmen” debut performances and the best contest works of  ART VISION Classic. All the shows will run in the evening at 7.30 p.m.

All-Russia Exhibition Centre VDNKh throughout 9 days of the festival will turn into the “Light park”. The guests of this park will be able to see the multimedia shows on the main avenue and on the facades of the pavilions. The admirers of Russian Visiting Patriarshie ponds you will be able to plunge into the atmosphere of Bulgakov's novel “Master and Margarita”. Central Children's Shop will turn into the time machine giving you a chance to become the hero of the fairy tale. Thanks to the special multimedia barges Moskva-river will also be involved in the festival. The water show will be performed in the section between the House of Music (Paveletskaya metro station) and Luzhnetskaya quay. The Krylatskoye Rowing Canal and the Chistye ponds won't stay aside from the festival program. Visitors of this places will be inspired by the colorful multimedia shows.

“Cirle of light”  festival will add color and light to your Moscow tour impressions. To plan your visit to the festival Moscow tour guides advise you to visit of the event to learn more about its schedule. Entrance to any venue of “Cirle of light” is free. We wish you a really good time!