If you have never been to one of the first summer country houses of the Sheremetev family, take a chance to visit the annual summer festival “Classical music in Kuskovo”. Here you will be able to enjoy the beautiful park - a favorite recreation place of Muscovites, the Russian State Museum of Ceramics and listen to the world famous music of Vivaldi, Motsart, Bach, Paganini and Tchaikovsky. Why not  visit this Kuskovo esate during your Moscow tours and plunge into the atmosphere of classical music performed by the best musicians of the present time. 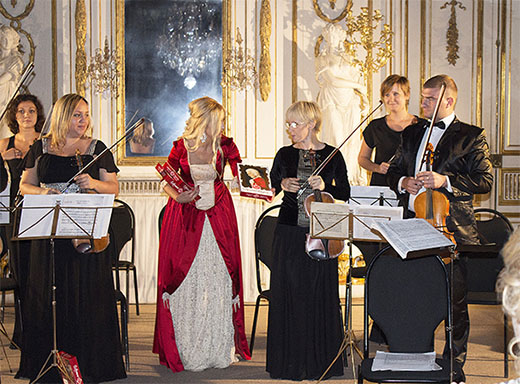 In July the visitors of this summer festival will be able to listen to two concerts devoted to the works of Antonio Vivaldi. The first one called “The nymph and shepherd” will reveal his mastery in pastoral music. The second (“The great Venetian”) will consist of different solo concerts for the flute, violin, bassoon and mandolin accompanied by the chamber orchestra “Moscow camerata”.

The admirers of the violin shouldn't miss two concerts - “Violin firework” and “Virtuoso's violin”. Within the framework of the festival you will have a chance to listen to the music of the well-known violinists Paganini, Tartini, Sarasate, Wieniawski and Kreisler.

One of the gems of this event in Kuskovo is an August concert “Russian sole” devoted to the 175th anniversary of outstanding Russian composer Pyotr Ilyich Tchaikovsky. It will contain mainly the romances and instrumental music of the master. Another point of interest is a concert “Casta Diva” - a great present for the admirers of the genre opera. It will give you a chance to listen to the famous arias, duets and ensembles from the operas of Russian and European composers.

Of course such festival will be incomplete without the great music of Johann Sebastian Bach and Wolfgang Amadeus Mozart. The concert called “Sunny Amadeus” will introduce to the guests some rare performed piano quartets. On the 3rd of September the concert “Two geniuses of one family” accompanied by the chamber orchestra “Seasons” devoted to the Bach father and his elder son will close this large-scale musical event.

Moscow tour guides wish you to have a really good time