Creative work of Konstantin Korovin. To his 150th birth anniversary.


29.03.2012 – 12.08.2012
Nowadays, the State Tretyakov Gallery ( the new building on Krymsky Val ) hosts the exhibition dedicated to 150th anniversary of an outstanding artist,  a Russian impressionist, Konstantin Korovin.  On display are more than 200 works from 22 museums of Russian, Belorussia, Kazakhstan and some private collections.

The exhibition demonstrates a diverse personality of Korovin, his interests in art, theatre and architecture. It reflects different stages of his art influenced by his teachers A. Savrasov and V. Polenov, by European trips where he got acquainted with Impressionist-masters ( K Mone and A. Renoir), and by symbolism.

Being under the charm of Paris, Korovin skillfully depicts the life of the French capital in hours of awaking or late hours illuminated with thousands of lights. 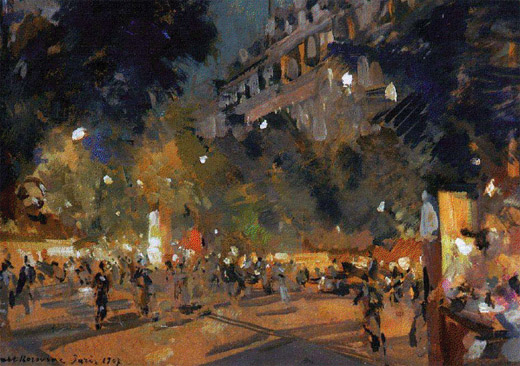 Besides being a prominent artist, Korovin is also known as a stage settings designer. On display are his numerous sketches to operas and ballets performed in the Bolshoi and Mariinsky thetres. Among them are sketches to theatre sets and costumes of ballets Don Quixote, Nutcracker, Golden Cocrel and operas Khovanschina, Sadko etc.

Korovin's artistic talent is also seen in his monumental series such as a mural executed for the art-industry exhibition in Nizhni-Novgorod in 1986, which later decorated one of the vestibules of Yaroslavsky train stations.

If you happen to be in Moscow in July, August, 2012, you might include Korovin's exhibition in one of your Moscow tours or discover his works on your own. The exhibition lasts till August, 12. 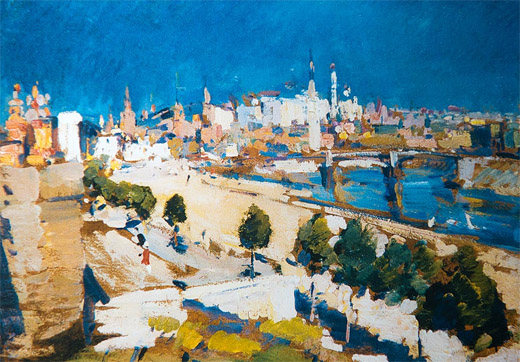 Kremlin view from the top of Christ the Savior Cathedral