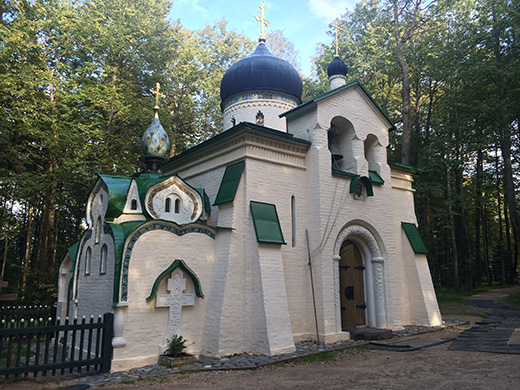 A unique peaceful area located 60 kilometers to the north-east from Moscow along the picturesque Vorya River, Abramtsevo became an artistic cloister in the late 19th century. Purchased by a railway magnet and a patron of art, Savva Mamontov, this estate became the place which gathered some prominent Russian artists such as Ilya Repin, Valentin Serov, Mikhail Vrubel, Viktor Vasnetsov and Vasily Polenov, all those whose paintings you could see in the Tretyakov gallery. They formed the Abramtsevo artistic circle and pledged to promote Russian national art.

Nowadays you are welcomed to visit the manor house to learn about its owners and its guests as well as to stroll along the shady alleys to see the Church of the Savior built by Polenov and Vasnetsov in the old Russian style, "hut on chicken legs" (children's playhouse), ceramic bench made by Vrubel.
This tranquil artistic cloister is extremely appealing in all seasons. If the weather is warm and sunny we might have a picnic on the bank of the Vorya river.

This tour is by commuter train ( 1 hour 15 min) and assumes quite a lot of walking.
Duration: 7-8 hours
Tour cost for the group of 10-15 pax: 1900 Rub/person
Included: commuter train tickets, museum admission and local guide, English-speaking guide- chaperone.
Please sign up for this tour at bridgetomoscow@gmail.com (Katerina)