English court is paying a visit to Moscow Kremlin 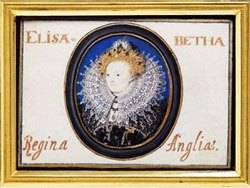 If you happen to be in Moscow this winter, do not miss the opportunity to visit the exhibition the Golden Age of English Court:  From Henry VII to Charles I. Taking place in the Assumption Belfry and One-Pillar Chamber of the Patriarch's Palace of Moscow Kremlin from October, 24, 2012 till January, 27, 2013, the exhibition puts on display the artistic heritage of one of the brightest epoch in English history- the Tudors and early Stuarts époque, who contributed a lot to the development of the English state, nationality , art and culture.

The main idea of the exhibition is everyday life and sumptuous feasts  of the English court including  knight tournaments and theatre performances. To illustrate this, one can see amour and arms, ceremonial portraits prominent rulers such as of Elizabeth I, Jacob I and Charles I; silver tableware, jewelry, precious pieces of interior décor.

All these  pieces of applied art were give to be displays by numerous museums of the UK, such as Viktoria and Albert Museum, National Maritime Museum of Greenwich, the Royal Armories, National Portrait gallery of London and others.
You can always tour the exhibition with your Moscow tour guide during your Kremlin tour.