09.05.2016
Traditional fireworks will start at 22.00 and last for 10 minutes. Firing set will be placed in 16 locations around the city. Among the best places to view fireworks will be bridges across the Moscow River, observation platform on Sparrow Hills, Victory Park and VDNH park. 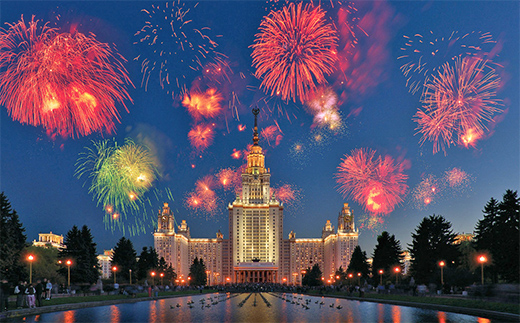 Victory Park on Poklonnaya Hill - point №1, on the Partisans Alley, 400 meters from the Museum of the Great Patriotic War
Victory Park on Poklonnaya Hill - point №2 on top of a hill at the entrance area
Luzhniki – Luzhnetskaya embankment, opposite the Grand Sports Arena
VDNKh -  the area between the Agricultural street and the northern gate to VDNKh
Novo-Peredelkino - a vacant lot on the shore of the pond, Fedosino Street, Building 18
Lianozovo - on the shore of the Altufievskoe pond, 38 Novgorodskaya Street
Izmailovo - a town named after Bauman, the area on the banks of Silver-Grape Pond
Kuzminki – 3A/ 1 Zarechye Street
Pokrovskoye-Streshnevo - the territory of the Tushino airfield, 500 meters south-west of Volokolamsk Highway
Mitino – 5 Roslovka Street
Obruchevo -  6/1 Mikluho-Maclay Street
Borisov ponds -  the embankment of the Moskva River, 25/2Borisov ponds Street
South Butovo – 11/3 Academician Pontryagin Street
Left Bank district - The  Friendship Park, 2B Festival Street

The Parks, which will run fireworks:


Please beware that fireworks are immensely popular and thousands of people might come to watch them.