10.09.2016 – 11.09.2016
This autumn everyone will have a great chance to attend interesting cultural events dated to the 869th anniversary of Moscow. This year the holiday will be celebrated on the 10th and 11th of September. It will be devoted to the Soviet and Russian cinema. On Tverskaya street the guests of the capital will see scenes from different Soviet and contemporary Russian movies such as “lvan Vasilievich Changes Profession”, “Stilyagi” and “Night Watch”, take photos with well-known movie characters and try food from the special cinema menu. 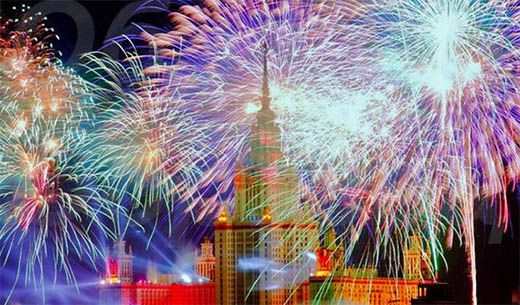 These days you might also come across a monument reading poems. “Reading monument” project will bring famous statues of Russian poets to life and let them read their verses. Thus you might meet Sergei Yesenin at Tverskoy Boulevard, Aleksandr Pushkin at Pushkinskaya Square and Vladimir Mayakovsky at Triumfalnaya Square.

Everyone who wants to try such kinds of sport as workout, parcour or armrestling are welcome at Luzhniky, where a big sports and music festival will take place.

On the 10th of September at 22.00 the organizers of the holiday promise the unusual fireworks resembling butterflies, rings and smiles. Moscow tour guides hope you will have a really good time and get a lot of impressions!