20.07.2018 – 05.08.2018
From July 20 to August 5, 2018  VDNKh for the fourth time will host Inspiration Interrnational arts festival. Each year  its program is dedicated to one genre or one important topic in the art from recognized classics to amazing experiments. This year the theme of the festival is  theater. 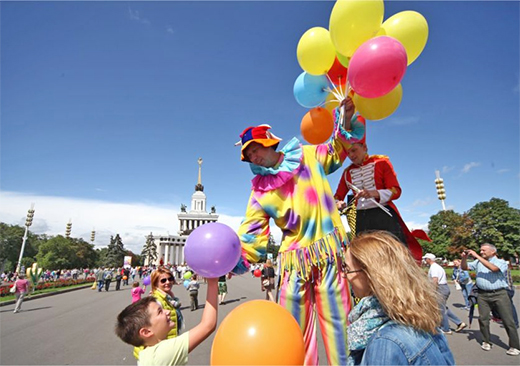 The entire territory of the VDNKh will somehow be involved in theatrical performances from different parts of the world. For example, on VDNKh's birthday, August 1, the French theater Les Plasticiens Volants will present the "Space Odyssey" show, during which the sky and the earth will be filled with giant figures.

The festival will be opened on July 20 by the world-famous German-Swiss group Rimini Protokoll. She will present not just a performance, but a kind of sociological research - the "Situation Rooms" project. His heroes were 20 people from all over the world who know firsthand what war is. Viewers will plunge with them into the disturbing atmosphere of what is happening in the world, going on a journey through the labyrinth of rooms and countries

The pond in Ostankino park will become a stage for  No Gravity theatre from Italy.
Aria show reminds of the Italian baroque and is built on a bizarre plastic game and work with a unique stage machine. The bodies of the actors unite into unusual figures, soar over the stage to the accompaniment of the "Roma barocca essemble" and the ancient instruments made by the masters in the Baroque era.

Tickets  to the performances "Aria", "Situation Rooms" and events in the House of Culture can be  purchased at or at the VDNKh ticket office.  Many other events at the festival are free.