If you plan your Moscow tour this autumn you should certainly take your time to visit the most spectacular music festival called The Spasskaya Tower uniting the best military bands from all over the world.  This annual event is dated for the Moscow 868th anniversary which is traditionally celebrated in the first Saturday of September. 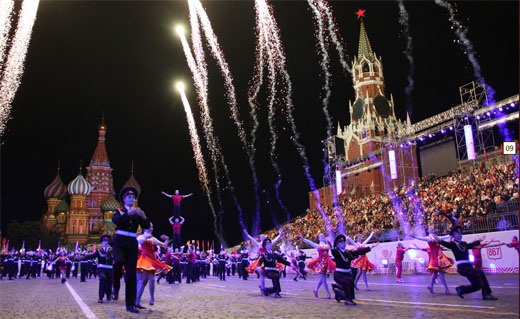 The Spasskaya Tower Festival is considered one of the most important cultural events which takes place on Red Square. The military bands will represent their countries and demonstrate the unique national, creative and musical traditions. Within 8 days of the festival the visitors will be able to enjoy the show performed by the most honorable Russian and foreign bands. During its entire history “The Spasskaya Tower” united about 100 military bands from 40 countries. Every year over 1500 musicians, military men and artists make the great performance in the very heart of Moscow.

Moscow tour guides recommend that you visit the of the festival. Here you can buy tickets and see the timetable of the show.

While visiting the festival pay attention to the special project “Spasskaya Tower for children” including a lot of educational and entertainment activities. The famous Russian festival will introduce you to our military and riding school traditions. Children will have a great opportunity to learn horse riding, get some sabre skills and take part in different contests and master classes. We hope you will have a really good time!