Irish Week, the largest festival dedicated to Ireland will last from 12 to 23 March 2014. Everyone who loves Irish culture is welcome to participate in over 70 events that are taking place in Moscow these days. 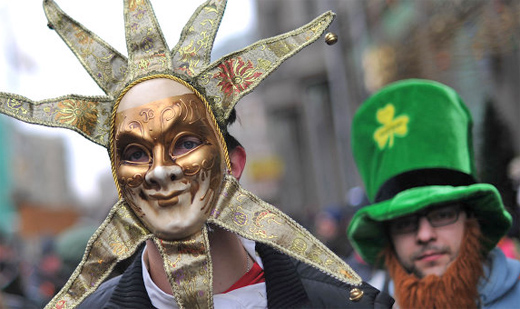 The parade on St Patrick's day has become almost a tradition in Moscow. Muscovites have been celebrating this cheerful Celtic holiday since 1992. This year the parade will be held in Sokolniki Park on March 15, it starts at 12.00  Come to dance and listen to popular Irish street music, bring along your friends and good mood!

You can prepare a traditional green costume or just attend a make-up station at the entrance of the park. This year organizers of the event invited make-up artists to help anyone to create a festive look. At the end of the procession the participants are invited to the central stage of the park to listen to the concert.

The festival will continue at the club «Pipl» with a 14-hour marathon of Irish and Russian music. The even starts at 3 pm. The program features 200 artists from Ireland, Scotland , Ukraine, Russia and Belarus, Irish dancing , theatrical performances, light shows , video art and disco.

Irish week in Moscow is a great time to learn about Irish traditions and culture. You can attend the festival of Irish cinema, 'Ticket to Dublin" Contemporary Music Festival, Irish pub tour of Moscow, Irish comedy festival and lots of other events. You can ask youк Moscow guide or check out website for more info.