20.07.2016 – 17.08.2016
Everyone who is not indifferent to jazz is welcome to Kolomenskoye estate to listen to a popular jazz tunes performed by the well-known Moscow bands. Five concerts of the festival will take place in a special pavilion near Tzar Alexey Mikhailovitch Palace. This interesting cultural event, held in our capital for the third time, will certainly impress you! 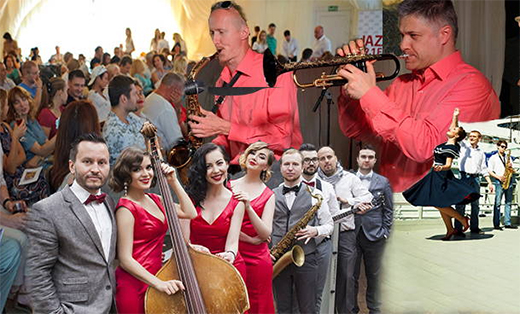 20th of July. “Trad Jazz Band” will share with you their freedom, aristocratism and intellectuality. Followers of acoustic tradition and the pioneer of new neoelectric movement will plunge you in the relaxed atmosphere of modern jazz.

27th of July. “1/2 orchestra” will introduce you to such musical styles as jazz, funk, hip-hop and drum-and-bass. Moscow jazz band consist of different musical instruments – from brass section to drums. They perform author's repertoire and try to approach brass sound to the modern electric music.

3d of August. “Moscow jazz” orchestra directed by Fedor Lyakevich, will play world-famous compositions of Luis Armstrong, Ella Fitzgerald and other acknowledged musicians. This young band has a lot of admirers in Russia and abroad.

10th of August. Outstanding composer and arranger Dmitry Yakovlev and his quintet “In Time” will play different compositions, including original versions of jazz standards and classical music in jazz arrangements. Jazz singer Valentina Neugodnikova will also take part in this concert.

17th of August. Retro jazz band “Real Jam” will complete the program of “Jazz Summer in Kolomenskoye”. One of the best Moscow ensembles was formed under the influence of jazz traditions of the XX century. Three singers and seven instrumentalists united to revive the so-called old jazz. This band will transfer the listener to the epoch of black-and-white cinema, swing and vinyl records.

More information on the event and ticketing you will get on of the organizers. We hope you will have an unforgettable time during your Moscow tour!