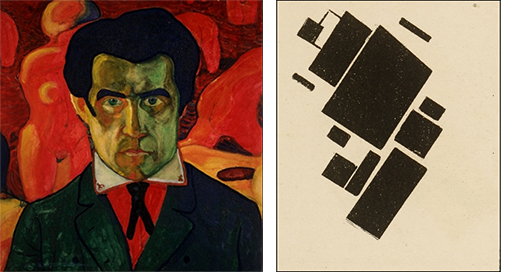 In 1913 the pioneer of the geometric abstract art of Polish descent became the founder the Suprematist movement, focused on basic geometric forms and painted in a limited range of colors. In the beginning of the 20th century he united outstanding representatives of the avant-garde style and revealed new personalities (the most well-known of them are Chashnik and Suetin) who changed the idea of modern art and design. The exhibition of the State Tretyakov Gallery will show you all the steps of Malevitch's art – from painting in the small laboratory to the creation of his own school.

The second project is devoted to the “Black Square” - the most well-known work of Kazimir Malevetch, which has always been a matter of dispute between among avant-qarde artists and critics who considered it to be “the zero point of painting”. The artist said the following words about his work : “It is from the zero, in zero, that the true movement of being begins.” This interesting project involves such modern artists as Jury Avakumov, Vyatcheslav Koleychuk, art-group “Blue noses”, and a lot of famous Russian media figures.

Moscow tour guides hope you will get inspired by these two exhibitions and have a really good time!