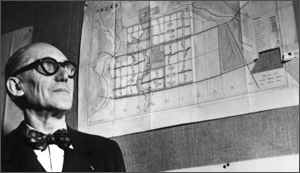 An exhibition devoted to 'the father of modern architecture' Le Corbusier is held in Moscow for the first time. It marks 125th anniversary of the architect's birth. About 400 exhibits including paintings, photographs, statues, models of buildings will show his impact on the culture and architecture of the 20th-21st century.

A very important part of the exhibition is dedicated to Le Corbusier's relationship with Russia.He visited USSR three times between 1928 and 1932 and built The Tsentrosoyuz Building in Moscow. It's the only work of the great master in Russia. In the beginning he was very passionate about his chances to work in the Soviet Union "It is with great joy that I shall contribute what knowledge I possess to a nation that is being organized in accordance with its new spirit". The problems he encountered in the Soviet Union would make him less optimistic in the future.  Le Corbusier also created a project for the Palace of the Soviets in Moscow which later became the basis for his famous the city of happiness known as "Radiant City".

Visiting Pushkin Museum in Moscow you'll  be able to see numerous paintings, sculptures, architectural projects of the master and trace the link between different aspects of his creativity. Most of the exhibits are provided by the Le Corbusier Foundation (Paris), the Moscow Shchusev Museum of Architecture, Stefan Arenberg and the Bellerive Museum (Zurich). Especially for the exhibition Barcelona School of Architecture created  more than a dozen models of buildings.

If you're interested in architecture  and art you can visit Le Corbusier exhibition during your Moscow tours. It's held in Pushkin Fine Arts museum until November 18.