24.01.2017 – 12.03.2017
The Pushkin Museum of Fine Arts continues its succession of exciting exhibitions with “Los caprichos” by Francisco Goya and Salvador Dali. Goya created a series of engravings in 1799, dedicating it to condemnation of human vices and imperfections of existing rules. The series includes such pieces as “The Sleep of Reason Produces Monsters”, “Love and Death”, “Good advice”, “Tantalus”, as well as well-known “Francisco Goya y Lucientes, Painter”. 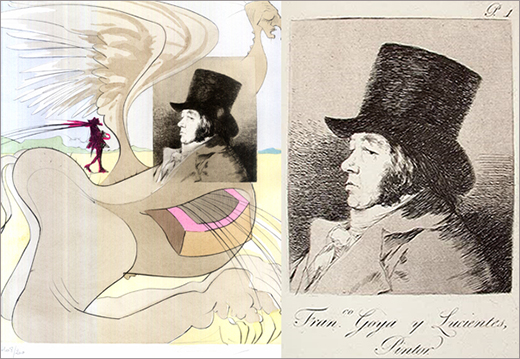 Almost two hundred years later Salvador Dali managed to add new elements to more than forty Goya’s etchings, and now visitors can see their works side by side.
Divided by centuries, two great artists, however, share world-famous works, as Dali was eager to complement Goya’s creations with colour and surrealistic details. The cultural dialogue between works is complex and somewhat dark, as they are filled with powerful metaphors, critics of social life and pitiless truth of human nature.

Each pair of works is provided with descriptions, original commentaries of Goya and translation, showing particularity of the curators' work.

We invite you to Pushkin Museum of Fine Arts during your Moscow tours.