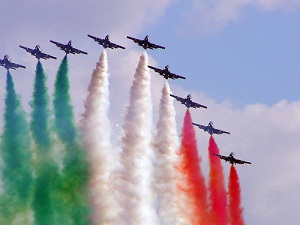 Interested in cutting-edge models of Russian and world -renowned aircrafts? Keen on aviation photography? This event held annually in Russian is definitely for you.
MAKS 2013, International Aviation & Space Salon takes place this year, traditionally in Zhukovsky ( Moscow region) on August, 27-September, 1. The aviation show is held on August, 30,31 and September, 1. The long flight program (11 am-5 pm) features the world renowned aircrafts not only of  Russian but also foreign production.  Russia will be presented by  famous aerobatic teams Russian Knights, "Strizhi", Russian Falcons, "Berkuty" while foreign participants from various countries ( China, Switzerland, Baltic states, Czech Rebublic)  For the first time in Russia, "August 1st", an air demonstration team of the Chinese Air Force, will perform on Chinese-made high-speed (Mach number – over 2) 4th generation J-10 jet fighters.   Swiss planes- McDonnell Douglas F/A-18 Hornet, Baltic Bees team, The Czech company Evektor will also perform its demonstration flights for the first time.
Traditional foreign participants such as French Air Force (Dassault Rafale fighters), The Airbus A380 will be also included in the program.
You find more details about MAKS 2013  on the official web-site. Our Moscow tour guide will be also glad to assist you to purchase tickets and explain how to get there.