All aviation fans are welcome to visit the International Aviation and Space Salon. MAKS-2011 will be held near Moscow in Zhukovsky from 16 to 21 August and attended by 793 companies from 40 countries. 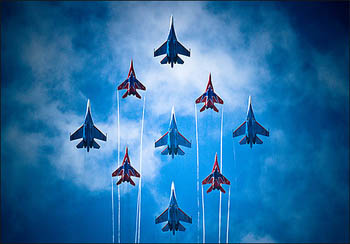 The first three days the Air Salon will be visited only by official delegations and business people. It will be open for mass attendance from 19 to 21 August.  The exhibition will feature the examples of aircrafts of both Russian and foreign production: passenger airliners, aerobatic planes, the world's best fighters and supersonic bombers, military transport planes and helicopters of all kinds. The exhibits will include such aircrafts as Tu-160, Tu-95MS bombers, A-50, IL-76 MD90, Su-27SM, Su-30M2 and Su-34 Su-35 Su-25SM, MiG-29SMT, MiG-31BM, Yak-130 and helicopters Ansat, Mi-8AMTSh, Mi-26, Mi-28 Ka-52.

The visitors of MAKS-2011 will be able to see the reconstruction of the World War II Soviet field airdrome with planes of the Battle of Moscow period. There'll be reconstructed planes I-15 bis, I-153 "Chaika", I-16 and MiG-3 first Soviet fighters. It is assumed that these aircrafts can be seen not only on the ground. There will be single missions, and if allowed, the group aerobatic flights.

What makes MAKS different from the leading aviation forums of the world is its colorful flight program. The guests of the show will see performances of the best Russian and foreign aerobatic teams. Among the stars are "Russian Knights", "Strizhi", "Russian Falcons" and "Rus". Russian test pilots will perform on Russian modern fighters and civil airplanes. The highlight of the MAKS-2011 will be a sensational flight of PAK FA - promising Russian fifth generation fighter.

Curious to try the space food? During the show you can visit the exhibition of more than 150 products that astronauts eat nowadays. On August 20 everyone is welcome to participate in the space food tasting, which represent approximately 40 different products.

No doubt that  MAKS-2011 is a must-see event this August. Why not come to Zhukovsky during your Moscow tours? Expect to spend the full day; your Moscow tour guide can accompany you to the show.