11.03.2013 – 17.03.2013
In peaceful life they protected
Sweet olden-time traditions;
With them on fatty Maslenitsa
Was always the Russian blin.
A.S. Pushkin
Eugene Onegin

This week most Russians are celebrating a long awaited holiday known as Maslenitsa (Butter week or Pancake week). For religious people it is the last week before the Lent when they can eat various dishes while for the rest it is the time when people can enjoy different varieties of pancakes, participate in  social gatherings and entertainment. 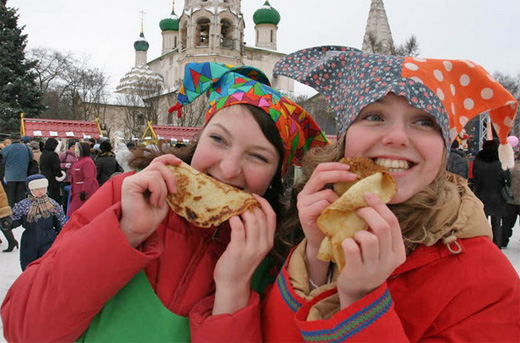 Back in times everyday of the Maslenitsa week had its meaning.
Monday (Meeting) was known for making the effigy of Maslenitsa, making  blini with the first one given to the poor to remember the dead. Parents-in-law sent their daughter-in-law to her parents for a day and also came to her parent's house in the evening.
On Tuesday (Flirting) newly-weds as well as young people were skating, sledding, horse sleigh  riding, eating blini ; it was the perfect time for matchmaking.
On Gourmand day, Wednesday son-in-law would come to his mother-in-law for blini. She also invited other guests.
Thursday (Revelry ) is the beginning of "Wide" Maslenitsa when a big variety of blini were made. People stopped doing household chores and took part in festive celebrations. Fist fighting and taking the snow fortress took place. It would end up with a rowdy feast.
On Friday ( mother-in-law evening) the mother-in-law would come to his son-in-law's house to enjoy her daughter's blini.
Saturday was known as a day when sister-in-law would invite her husband's sister to her house for blini. She invited her married or unmarried relatives depending on husband's sister status. She also had to give her a gift.
Maslenitsa week ended up with Forgiveness Sunday when people ask each other's forgiveness. It is also the day when the effigy of Maslenitsa is put to the flames of a bonfire

To enjoy this week you should go to one of the Moscow parks: Sokolniki, Gorky park, Kuzminki, Ostankino, Kolomenskoe , Tsaritsino. During the whole week and especially at the weekend festivities will be held all around the city. For more information, ask your Moscow tour guide where to go.