01.09.2017 – 10.09.2017
Did you know that in 2017 Moscow celebrates is 870th anniversary? We invite you to join a festival from September 1 – 10 devoted to this glorious event  and enjoy various concerts, performances, competitions, master classes and interactive games. The main events will be held on Tverskaya and Arbat streets, on Manezhnaya, Tverskaya and on the Revolution Squares. 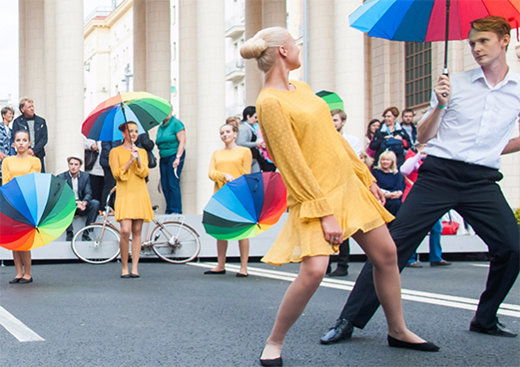 Everyone who loves the theatre is welcome to the Revolution Square. The visitors of all ages might practice acting or attend lectures on the history of the Moscow theaters. Every day from 15 pm to 7pm on weekdays and from 4 pm to 7 pm on weekends there will be theater and musical performances on the stage of the Revolution Square. Those who love opera and ballet are welcome to Kamergerskiy Lane. You’ll have a unique opportunity to watch the classical and jazz-modern ballets, listen to operas as well as popular songs about Moscow.

On the Arbat from the first day of autumn there will be a festival site dedicated to the creators of planes and conquerors of space who lived and worked in Moscow. The club of aircraft designers will offer classes devoted to the most popular passenger and cargo planes, as well as the fighter planes that are being constructed in Moscow. In addition, guests will be offered to collect flying models of An-2, Yak-3 and Su-27 planes.

If you are willing to join a free walking tour go to Novy Arbat street (near house 13) and in Stoleshnikov Lane (near houses 6 and 8). The walks start at 7 pm on weekdays and at 2 pm and 5 pm on weekends. Pre-registration is not required..

Many more events will happen in Moscow on September 9 and 10. Stay tuned and explore Moscow with your private Moscow guide!