On September 6 Moscow will celebrate its 867th birthday. Over 1000 events are prepared for Moscow City day: numerous festivals, concerts, theatre performances.  This day you can also learn a lot about the history of Moscow. 67 museums will work for free. If you speak Russian you can join over 170 free walking tours, bike tours and city quests. 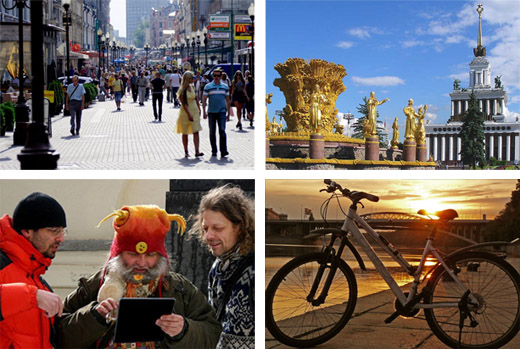 Every hour from 11:00 to 21:00 a guide will be waiting outside 7 central metro stations (Arbatskaya, Kropotkinska, Kitay Gorod, Pushkinskaya, Kuznetsky most and others) You can  discover aristocratic Ostozhenka street and join painting master class, strall along Tverskoy bulvar, learn about one of the oldest Moscow district located outside of Kitay gorod metro station and explore many other streets, parks and squares of central Moscow

If you like Soviet architecture we recommend you  a tour of VDNH park: Every hour from 11 am to 9 pm you can attend a free tour of the park and visit most interesting pavillions.

If you love to explore the city by bike or by kick scotter you can join a tour of Gorky park or explore the area near Shablovskay metro station where lots of constructivist style buildings are preserved. Another option is the tour of ‘Meshanskaya sloboda’ (the area near Prospekt mira metro station) where you can learn anout Moscow of the 18th century.

This day you can join several city quests, solve most tricky riddles and get a prize.

You can find all the info  about the main tours and activities at the official webpage . We believe that it is a great idea to have a Moscow tour on September 6.