Moscow. Faces of the twentieth century

Moscow.  Faces of the twentieth century. is an exhibition held in recently renovated museum of Moscow on Zubovsky boulevard. It shows how the city lived through different political regimes from Russian Empire through Soviet era up to post-communist Russia. 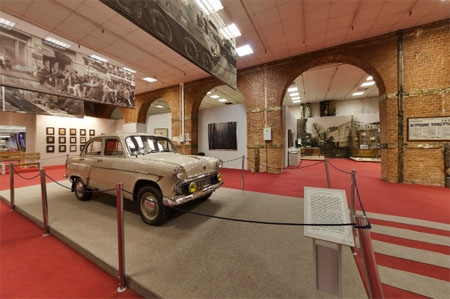 The exhibition tells not only about the events of the urban life. First of all, this is a story about people, who lived in Moscow in the last century. They are builders and architects, artists and workers, scientists and writers.  In the museum halls you'll see the unique memorabilia of engineer Shuhov, architect Iofan, artists Svetlanov,  Mordyukova,  Zykina and many other famous people who lived in Moscow. Most of the exhibits are shown for the first time

Moscow museum collection reflects the life and experiences of ordinary Muscovites: their family history, participation in city events. You'll see how the fashion, household items were changing over time. The exhibition features rare cars such as
"Moskvich", ZIS - 110I (USSR, 1948), GAZ - 67 (USSR, 1942)

The Museum of Moscow invites every visitor to take part in the creation of the future museum "Moscow. The twentieth century". Family archives, documents and photographs, furniture, toys, household items – al this will become part of historical heritage of the 20th century.  The most interesting exhibits will be displayed at the New Museum exhibitions and preserved for posterity.

If you're interested in Moscow 20th century history we'll be happy to include this museum in your Moscow tours itinerary.