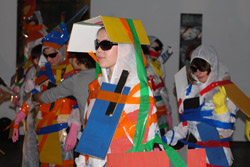 This year on May 19 Moscow will celebrate International Museum Day with night tours, performances, concerts and street flash mob.

"Moscow museum Night 2012" project  brings together more than 180 museums and galleries of the capital. This day many Moscow museums will be open for free and a special night program is prepared for visitors.

You can learn more about this event visiting the official website . It's in Russian only but your Moscow tour guide can help you to plan your evening. Most of the events will run from 6 pm until 2 pm on May 20.

Coming at 10pm on Red Square you can watch the show performed by the Kremlin horse Regiment. If you come to St Basils cathedral from 6 – 10 pm  you can watch different movies, drink tea, listen to the choir singers and watch the shooters completions.

If you like modern art don't miss the Museum of Modern Art on Petrovka to watch performances and modern art shows.

Interesting tours and music concerts are waiting for the visitors of Moscow estates, such as Tsaritsino,  Lublino, Kuzminki and Kuskovo and others.