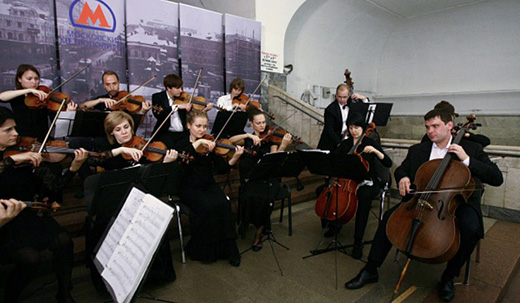 This year Moscow underground launches an interesting cultural project “Music underground” that will give passengers a great chance to admire live music of different styles performed by Russian musicians. The organizers followed the example of other countries and chose safe and acoustic-friendly places for such concerts. The most popular of them are the hall of Kurskaya station, vestibule of Vystavochnaya station and the north entrance hall of Mayakovskaya station.
Visiting concerts in Moscow Underground you will get acquainted with new music bands — listen to the so-called “plays” of Kush Orchestra, enjoy the breathtaking composition of duet Alttoronado, admire violinist-virtuoso Vladimir Semibratov and learn more about our culture with "the queen" of Russian balalaika Antonina Sinitsyna. It should be mentioned that the main aim of this musical project is to make music closer to people, let this art fill the everyday life with fresh and bright colors.
While taking Moscow metro tour with your Moscow tour guide, you might become a concert listerner by chance.We hope you will enjoy it!