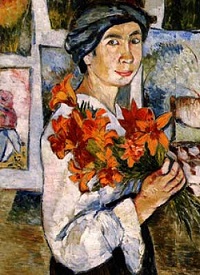 Self-portrait
A large-scale personal exhibition of one of the most outstanding figures in early 20th century art history, Natalia Goncharova takes place in the Tretyakov gallery (New Buildinng on Krymsky Val)  from October, 16 till February, 16, 2014. The exhibition reflects numerous facets of her talent as a Russian avant-gard artist, painter, costume designer, writer, illustrator and set designer.
Goncharova plays a special role in Russian art. Having learnt from French artists such as Van Gogh, Paul Gaugan, Anri Matisse, Pablo Picasso, she based her art on  national Eastern-Christian traditions: iconography, wooden sculpture, cheap popular prints and primitive Russian art. She saw the movement to the future through the emersion to the past. This exhibition  showcases over 400 paintings, graphic works and theatre decorations  which have been brought together from different museums all over the world (the Russian Museum, the Regional Museum of Russia, the Pompidou Centre (Paris), the Museum of Modern Art in Paris, 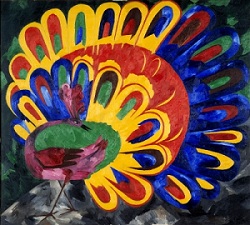 Peacork
the Fashion Gallery Museum, the Ludwig Museum (Cologne) and the Stedelijk Museum (Amsterdam).)
The exposition is divided into three zones. Two of them represent figurative art and graphics of Russian and Post-Russian period. The third zone is dedicated to the search of new artistic forms: Cubism, Rayonism, Futurism, Abstract art.
Those who are interested in Russian art of early 20th century are welcome to visit the exhibition of Natalya Goncharova with a Moscow tour guide.