Night at the theatre 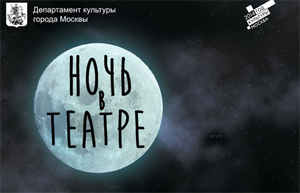 Moscow theatres have prepared a special program for the International theatre day. On March 26 over 40 theatres will stay open until midnight and even later, the visitors will have a chance to see numerous performances and learn more about the world behind-the-scenes.

"Gogol - center" known mostly for its contemporary performances presents a program which includes a tour of the theater, meeting with the Russian film and theater actor Alexei Devotchenko, a concert and a DJ master class.

Theatrical tour of the "bad apartment' № 50 is prepared for everyone interested in the novels by
Mikhail Bulgakov. The museum of the famous writer also offers interesting thematic lectures and master classes.

The legendary performance of "Sailor's Silence ", which was banned for over 30 years, will be staged in the theatre run by Oleg Tabakov. "The School of Modern Drama" prepared lots of interesting lectures, guided tours, workshops and an interactive Jam session.

"Night at the Theatre " program is free, but to get to the event  you will need to pre-register. You can find more information on the official websites of the theaters and on the official site of the Department of Culture of Moscow. Our Moscow guides will be ready to accompany you If you are interested in any of the events.