Home → Moscow events → Once upon a time in a park

Once upon a time in a park


10.08.2012 – 12.08.2012
The First street theater and carnival culture festival will be held in parks and gardens of Moscow on August 10 – 12. The Bauman garden, Kuzminki park  and Gorky Park will feature performances of the best Russian and foreign artists. Each day offers surprises to the visitors. "Once upon a time in a park" is not just the theatre festival. Numerous clowns, jugglers, tightrope walkers, trapeze artists, acrobats, eccentrics will create the happy atmosphere of the creative absurdity. 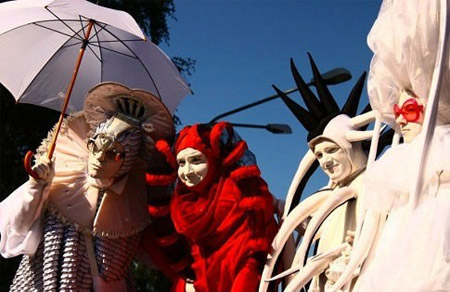 The festival opens on August 10 at 3 pm in the Bauman Garden with an incredible procession of smiling trees, flying fairies, dancing jugglers. The visitors will meet real antelopes from Switzerland and fairy-tale characters who speak unknown languages.

On Saturday, August 11, the festival will be held in Kuzminki park from noon till 10 pm. You'll see such theatre groups as Dennis Klopov and "Obsession", "Wandering Puppets by Master Pezho", "Maracatu" drum show, a secret program by "Fire People" and the «Cantiere Ikrea» from Italy. At 7 pm a well-known St Petersburg theater "Licedei" will perform on the main stage

On August 12 we invite you to Gorky park to see over 100 artists of different genres and lines. The culmination of the festival will be "The Heart of Angel" performance  by TOL Belgian theater, who took part in the opening of the Olympic Games in London. The performance will feature all kinds of street art - live singing, flying acrobats, parades, video projections on objects, and fireworks. The performance starts at 7 pm.

Everyone having Moscow tours these days are welcome to attend "Once upon a time in a park' festival. It'll bring joy to the hears of adults and children.