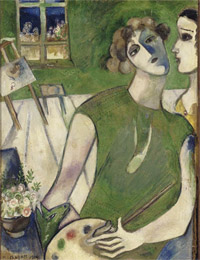 Surprisingly most of the artists representing "Paris school" are  immigrants. They didn't belong to a single art school or a learning institution, but for all of them Paris was the new home and the most artistic city in the world. These artists created Post-Impressionism, Cubism, and Fauvism , and also worked in  Surrealism and Dada.

The exhibition is held in the Gallery of European & American Art (Pushkin museum). If you're planning a Moscow tour until November don't miss the opportunity to see so many marstepieses in one place!