14.03.2011 – 22.04.2011
Amazing world of forests and swamps, unknown ocean depths, the highest mountains, glaciers and hot deserts reveal the unforgettable world of its inhabitants living in harmony with our planet. 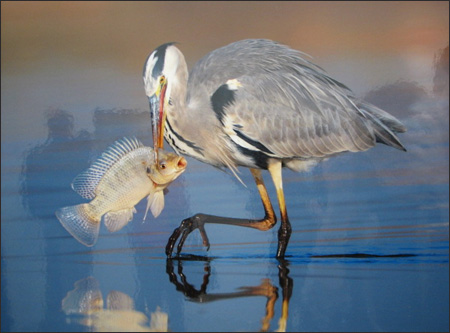 Fifth year in a row Moscow hosts photo exhibition "Zolotaya cherepakha" ( Golden Tortoise) where best works of wild nature photographers are displayed to pretentious Moscow audience. About 1500 photographers from 37 countries participated in this annual photo contest to be chosen in one of the numerous nominations like "Animals", "Birds", "Underwater world", "Microcosm" etc. This exhibition strikes not only by the variety of genres and the geography of its participants but mainly the beauty of world represented in photos.
Each photograph is accompanied with a detailed description of location, weather conditions and any other circumstances of shooting which helps the spectator to move in space and time. For example, my attention was stuck to the photo with a humorous title "To have a flight at the end". The author explains that blue herons rarely hunt in the vicinity of surf being afraid of waves. These birds had to change their tactics. To catch iguanas they sneak up on their prey and make a decisive thrust. 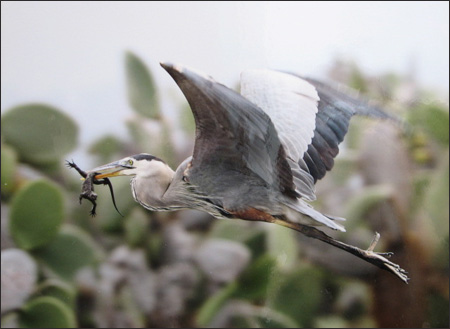 To have a flight at the end
However, the photographer did not expect to see such a resistance from iguana. Eventually the prey was defeated and had no choice but enjoy her last flight.
Such poetic or philosophical titles appeared due to uniqueness of the captured moment. Have you ever seen bears in such tender embraces. The title "Faith, Hope and Love" speaks to itself. 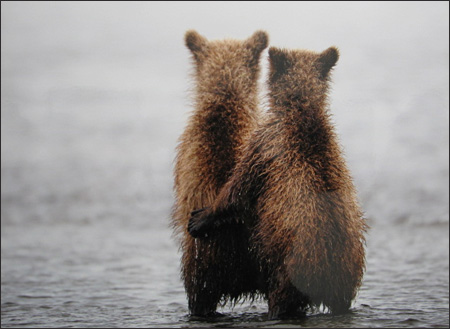 Faith, Hope and Love
This gallery of snapshots are various in genres, however, a huge part of it represents the world of animals.
Those having Moscow tours in April are welcome to visit this exhibition in the building New Manezh, Georgievsky per, 3 which will be held till the 22nd April.