29.12.2014 – 01.03.2015
All the visitors of Moscow Sokolniki Park will be able to attend the most spectacular winter festival called “Planet Ice” (in Russian “Планета lёd”) till the end of February. A fairy tale made by well-skilled ice sculptors will meet the guests with a series of sculptures accompanied by a special dynamic lighting. 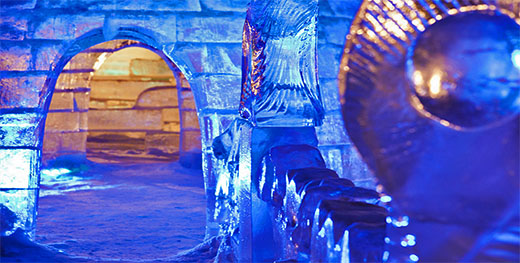 This year the organizers prepared some novelties that will certainly draw the attention of  ice sculpture admirers. One of them is a real art gallery with some masterpieces of Salvador Dali, Pablo Picasso, Vincent van Gogh and Henri Matisse. Other points of interest are ice cinema “Iceberg”, ice hotel “Far North” and ice Russian bath (in Russian -“banya”) with the steam-room (in Russian “parilka”) and traditional brooms. If you have free time to come to Sokolniki this month, Moscow tour guide advises you to test a cool ice-run and two skating rings, situated on the park territory.

Thanks to the creative teamwork “Artbliss”, the founders of Museum of Ice in Sokolniki Park,  visitors of the ice-town can have a great day  out in the fresh air and feel the charm of the last month of Russian winter. We might include your visit in your Moscow tour itinerary. For more information about this festival, you can go to its . To get acquainted with the  “”  team and see the most beautiful ice and sand works of the world champions you can visit their web page.