If you are enthusiastic about robots and like the idea of artificial intelligence it's high time to visit the unique exposition called “Robostation” which enables every visitor to plunge into the life of robot-constructor.  This curious event giving a chance to enter the world of high technologies takes place in the second pavilion of VDNH. Today Moscow tour guides want to reveal some secrets of this inspiring exhibition. 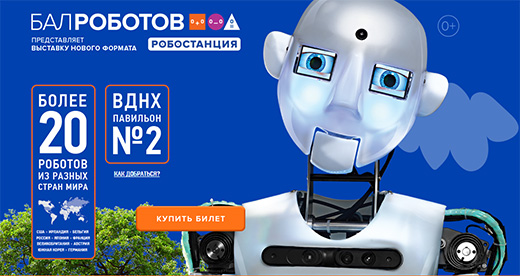 First of all, visitors of “Robostation” will learn more about work process of engineers, industrial designers, programmers and futurologists – professionals connected with robot construction. You will see with your own eyes the way of chip creation and get familiar with such materials as nano-cardboard, electrical sticky tape and 3D-wire. The program of this event contains a lot of lectures and masterclasses which will appeal both to adults and children. The latter will certainly enjoy the art-maze with stunning special effects, cozy hammocks, swimming pool filled with beans integrated into futuristic design.

The guests of this high-tech exhibition shouldn't miss the Second International Roboforum “Robots and people”, summer camp for young scientists called “Roboschool” and outstanding show “Robots' Ball” . Moscow tour guides advice that you take a chance to visit spherical cinema and have an unforgettable breakfast in the company of a real robot in so-called “Robocafe”. More information on this event and ticketing you will find on