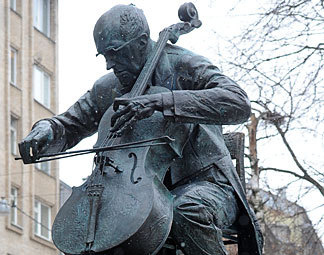 Rostropovich monument in Moscow
The International Mstislav Rostropovich Festival is dedicated to the 85th anniversary of the greatest Russian cellist and conductor. The festival runs one month from March 27 till April 27 in most prestigious and beloved Moscow concert halls: the Conservatoire Great Hall, the Tchaikovsky Concert Hall and the Column Hall.

Symphony orchestras from Russia, Britain, Italy, Japan and South Korea are invited to participate in the festival. Among the world- famous performers are  the cellist Enrico Dindo, the pianists Rudolf Buchbinder and Yuja Wang,  Orchestra dell'Accademia Nazionale di Santa Cecilia (Rome), the Saint Petersburg Academic Symphony Orchestra, the Glenn Miller Orchestra and many other great soloists and ensembles.

According to tradition, the festival will feature the music of Prokofiev and Shostakovich. Rostropovich regarded them as teachers and always expressed words of gratitude and admiration to these greatest Russian composers. One of the highlights of the festival will be the performance of Sergei Prokofiev's Egyptian Nights by London Philharmonic Orchestra with the participation of the actors Chulpan Khamatova and Konstantin Khabensky.

During your Moscow tours you'll have a chance not only to listen to music rarities but also to see the exhibition "Rostropovich – Vishnevskaya" devoted to the famous music couple of Mstislav Rostropovich and opera singer Galina Vishnevskaya.

As a tribute to Rostropovich his monument has been recently unveiled in central Moscow.