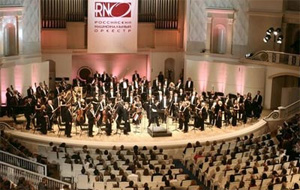 This September music lovers are invited to Moscow Tchaikovsky hall to attend the Russian National Orchestra Fifth Grand Festival .  World's greatest musicians will perform music by Tchaikovsky, Rachmaninoff,  Khachaturian, Gershwin and others. One of the highlight of the festival will be a concert with Mikhail Pletnev as piano soloist.

Among the world famous participants of the festival are a French pianist Hélène Grimaud ( September 6) , German violinist Isabelle Faust ( September 19) , the Canadian soprano Misha Bryuggergosman ( September 15) , and Gidon Kremer ( September 12).  The festival will end with thunderous Mahler's Second Symphony , which will be permormed on September 23 . Probably the most unexpected event will be an oratorio by Jules Massenet's "Mary Magdalene " (1873 ), written under the influence of sentimental positivist " Life of Jesus " by Ernest Renan (10 September).