28.09.2017 – 14.01.2018
The New Tretyakov Gallery presents a new exhibition devoted to 100 year anniversary of the Russian Revolution.  At the exhibition you’ll see 1917 year through the eyes of the Russian artists including Grigoriev, Kustodiev, Nesterov, Petrov-Vodkin, Kandinsky, Malevich and others. 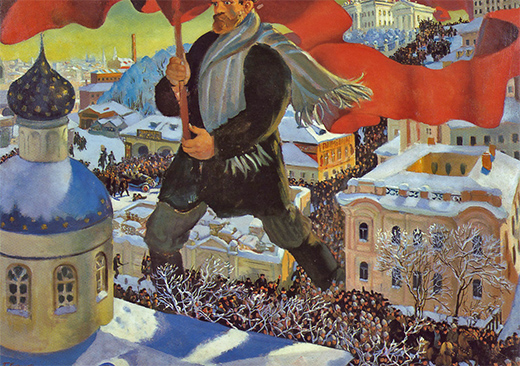 Bolshevik. Kustodiev
It took over three years to prepare the exhibition. The exhibition "Someone 1917" does not show real images of political events. There is no Lenin on the armored car, storming of the Winter Palace, speeches from the stands and revolutionary-strike series. However it gives you a chance to see how different artists reacted to the changing world in 1917.

The 150 works of the exhibition are divided into several parts: "Myths about the people", "City and townspeople", "Faces of the epoch", "Get away from this reality!", "Troubled", "Utopia of the new world", "Chagall and the Jewish question".

Visitors will see exhibits from the Tretyakov Gallery, the Russian Museum, the Museum of Moscow, the Georges Pompidou Center, the Tate Modern Gallery, the Tel Aviv Museum of Art.

We also recommend that while visiting the Gallery you check the exhibition “Wind of revolution. Sculpture of 1918 - early 1930” or attend “The 7th Moscow International Biennale of Contemporary Art”. Both events are held in the same building. We’re happy to provide you Moscow tours with a private guide.