"Spasskaya Tower" International Military Music Festival will traditionally take place on Red Square at the end of summer season. This year the festival will be held for the tenth time.
The event is rightfully considered the largest international cultural project in Russia. 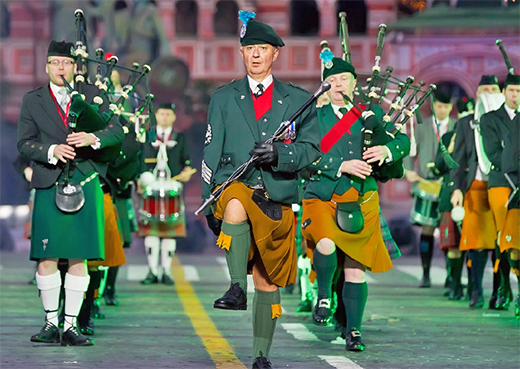 This year on the occasion of the jubilee all the orchestras prepared extremely interesting programs. 30 teams from 15 countries will take part in the 10th International Military Music Festival Spasskaya Tower on Red Square: Italian carabinieri and Daoist monks, Celtic bagpipers and Scottish dancers, Yerevan drummers and Moscow trumpeters, "gladiator" performances of martial artists – overall over one thousand musicians during 9 days of the festival. At the end of the concerts the guests will be treated with magnificent fireworks in the night Moscow sky.

"Spasskaya Tower"  is a great event for the whole family.  Kids under 13 may visit "Spassky Tower for Children" zone. The project introduces children to Russian military traditions, promotes children's equestrianism and the traditions of the Russian riding school, represents the best children's musical groups.

An important part of the "Spasskaya Tower" Festival is an extensive charitable program that provides for the uncompensated distribution of several thousand tickets among socially vulnerable groups of the population, as well as in children's institutions, schools in Moscow, the Moscow region and other regions of Russia.

Your Moscow guide can help you to get the tickets to the festival.