26.08.2016 – 05.09.2016
The International Military Music Festival "Spasskaya Tower" will be held on Red Square from August 26 –   September 5. The festival gathers the best military-orchestras and cultural bands from all over the world.  Among the participants are the musicians from Russia, Austria, Belarus, Greece, Israel, Italy, Kazakhstan, Mongolia, Singapore, Slovenia, Japan. 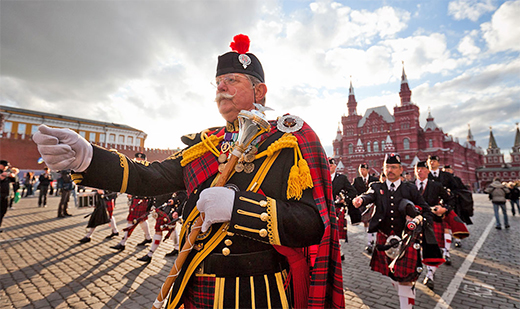 The festival will be held on Red Square however on Aug 27 you can see the parade of the Russian and foreign participants in VDNH park. About 1000 musicians will march along the Central Avenue of the park at noon.

The morning program of Spasskaya Tower festival is free.  ‘Children's village’ on Red Square is the area were kids can practice horse riding and learn about horse care, participate in chess tournament and even master the art of sword fighting. The project will present the best children's musical groups

The evening program starts at 6 pm with a music show and numerous activities for the children such as master-classes, adventure games, interactive programs. At 6.30 pm you’ll see the performance by the Cavalry Escort of the Presidential Regiment. The main concert program start at 8 pm and lasts for about 2 hours.

You can find the program details and tickets information  on the of the festival. This incredible show might become the highlight of your Moscow tours.