The art of freedom. Anatoly Zverev and Vladimir Yakovlev

Dom Nashokina gallery presents an exhibition devoted to the two brightest characters of the Russian underground art in the 20th century.

Anatloy Zverev was a founder of Russian Expressionism in the 1960s. He was famous in the west, his works were admired by Pablo Picasso but in his home country he was doomed to poverty and wandering.  Persecuted by the Soviet authorities Zverev didn't even have a permanent place to live and his only exhibition in Russia was held shortly before his death in 1986. 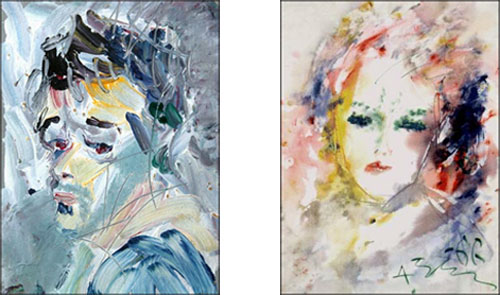 The Russian painter Robert Falk said, "Artists of that calibre are born only in 100 years."  Zverev's expressive and emotional art reminds us of his great predecessor Van Gogh. Art critics usually compare his style with the work of the American Abstract Expressionist painter Jackson Pollock.

Zverev was a rebel, unwilling to surrender to any rules. In 1905 he entered an art school but  a few months later was expelled for disobeying the school regulations. His "guilt" was that he was arguing with teachers too much. Once he had enough sense to say in front of the class that the teacher's function should be limited. "Teacher," he said, "should keep the classroom in order, provide students with paint, sharpen pencils, and nothing more."

The creative legacy of Anatoly Zverev includes more than 30,000 works. He painted at a great speed, sometimes a new image could appear within a few seconds. His paintings are full of artistic improvisation and turbulence.

Vladimir Yakovlev's paintings give you a very different feeling. They look much quieter, may be more lyrical.
Yakovlev was born in Balakhna, Gorky Region, in 1934. He had no formal training in art. From 1959 contributed his works to non-conformist art shows.

Yakovlev wrote mostly in gouache on paper or hardboard, preferring restrained and cool colors. Going through a brief period of fascination with the lyrical abstraction he turned to figurative art, creating symbolic and meditative images. His favorite subjects include  fish, sailboats, landscapes,  self-portraits and portraits of the prophets, and above all - flowers. Fragile and strong, sunny and tragic, these flowers are not to be found in nature. They are like images of people, beautiful and lonely at the same time. Most works are cycles, but the artist never repeats himself. He is constantly improvising, varying the line, color and shape.

The last 20 years of his life Yakovlev spent in psycho-neurological clinic. His recognition in Russia came only in Perestroika times. His first solo exhibition was held in 1990-1991 in Moscow.

There's something that brings these too artists together. Both were not recognized by the Soviet regime, both lived in poverty and suffered from mental instability, both managed to keep their freedom and self-expression.

Your Moscow tour guide can tell you the story of the Russian Non-Conformist art. If you're an art-lover we recommend you to visit this gallery during your Moscow tours.