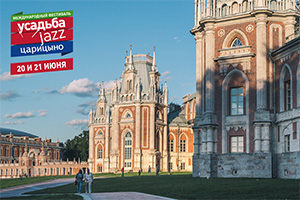 Moscow tour guides recommend that you visit the most outstanding summer music festival called “Usadba Jazz” that will take place this weekend in Tsaritsyno Park. This open-air traditional event unites a lot of talented jazz, funk, lounge and rock musicians from all over the world.

This year the organizers of the festival prepared a lot of surprises for the guests. For example, on the 20th of June you'll be able to enjoy the “Billy's Band” from St. Petersbourg, performing so called “alco-jazz” recognizable by its specific relaxed manner; experienced Moscow blues band “Crossroads”; one of the pioneers of the afro-beat style, legendary drummer Tony Allen (France); the band “Rocqawali» (Denmark-Pakistan) combining the musical traditions of West and East; original Estonian folk-trio “Trad. Attack!» and the most well-known participants of the Russian version of the super-popular show “Voice”.

The 21st of June will be celebrated by the performance of Nino Katamadze (Georgia), the famous jazz man Igor Butman with his orchestra, the unique family choir “The Jones Family Singers” (USA), Australian “Но Hiatus Kaiyote ” with the music called “soul of the Future”, Norwegian trumpet-player Mathias Eick and many other contemporary musicians.

While visiting this wonderful place, don't miss a chance to go boating to enjoy the beauties of Tsaritsyno pond from the water. Within the frames of this event cultural centre “ZIL” will hold a series of interesting masterclasses on drum play, capoeira, portrait and report photography. Visitors of the festival will have a great opportunity to practice making sachet and floral compositions inside the grass vessel. The youngest jazz admirers will certainly enjoy the participating in the presentation of Babyconsert, created especially for the children.

You can learn more about the Festival from its official site - . Our managers can help you to include the visit to the festival during  your Moscow tour.